The Carolina Reaper was measured at 1.569.300 SHU. The former Recorder Holder was the Butch T Scorpion with a SHU at 1.463.700. The Hippy Seed Company had the record for the world hottest chilli together with Marcel de Wit and Mark Peacock from 1st of March 2011 till November 2013.

Congratulation with the new record to Ed from USA. Try our World Record Pack if you want to grow some of the record holders.

THE STORY ABOUT OUR WORLD RECORD 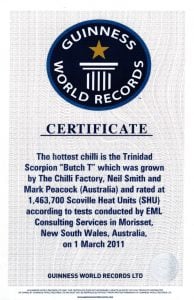 Here is our story about, how Neil Smith got the former world hottest chilli.

Butch Taylor is a dear friend to us and he sent us the seeds to Neil many years ago.

For years Neil claimed the Butch T was the hottest chilli in the world, but no one believed him and he could not afford to get it tested. In 2011 Marcel de Wit from The Chilli Factory paid for the test and Neil, Marcel and our scientist Mark Peacock apply for the Word record.

In March 2011 we got the Guinness Record for the world hottest chilli together with Mark Peacock and Marcel  De Wit.

Join Waitlist We will inform you when the product arrives in stock. Please leave your valid email address below.